In Harm’s Way by Irene Hannon 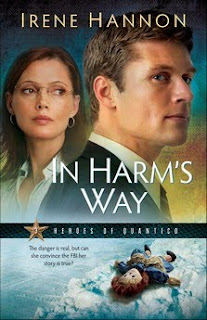 The danger is real, but can she convince the FBI her story is true?

In Harm’s Way is the final book of the series, where FBI special agent Nick Bradley is confronted by Rachel Sutton: Nick has seen his share of kooks during his fifteen years with the Bureau. But Rachel is an enigma. She seems normal when she shows up at the FBI office in St. Louis--until she produces a tattered Raggedy Ann doll she found and tells him she thinks something is wrong because of a strange feeling of terror it gives her when she touches it. Nick dismisses her, only to stumble across a link between the doll and an abducted child, setting in motion a chain of events that uncovers startling connections—and puts Rachel's life on the line.

Publishers Weekly praised the novel, calling it a “fast-paced crime drama with an aside of romance.” Filled with palpable suspense and a touch of romance, In Harm's Way is the final installment of Hannon’s thrilling Heroes of Quantico series.
Irene Hannon is the bestselling author of more than 30 novels, including Against All Odds andAn Eye for an Eye. Her books have been honored with the coveted RITA Award from Romance Writers of America, the HOLT Medallion, and the Reviewer's Choice Award from Romantic Times BOOKreviewsmagazine. For more information about Irene and her books, visit her website at www.irenehannon.com.

Revell, a division of Baker Publishing Group, offers practical books that bring the Christian faith to everyday life. They publish resources from a variety of well-known brands and authors, including their partnership with MOPS (Mothers of Preschoolers) and Hungry Planet.

Praise for Irene Hannon and the Heroes of Quantico series:

“….fast-paced crime drama with an aside of romance.”
— Publishers Weekly

“I found someone who writes romantic suspense better than I do.”
— Dee Henderson


Here's my review of this wonderful romantic suspense read:

First of all, I would like to extend a heartfelt “Thank you” to Irene Hannon and her publisher for sending me a copy of "In Harm's Way" to review for them. I have always been grateful for this generosity, and I am trying to improve at being consistent in taking the time to thank these wonderfully giving individuals in a public forum. I really appreciate your time, effort and expense in making a reviewer copy available to me.

Irene Hannon’s third and final installment in the Heroes of Quantico series is a gripping read. “In Harm’s Way” tells the story of a young teacher who finds herself in a rather awkward position. A downward glance reveals a discoloration in the snow that she decides to dig up and turn in to the lost and found of the restaurant it is near. She releases what turns out to be a Raggedy Ann doll from her icy prison, but when she touches it, she is filled with dread. Rachel doesn’t believe in psychic ability. But she’s convinced that she cannot ignore the feelings she gets when she touches the doll. Taking the risk to be laughed at, Rachel takes the doll to the FBI and tells her crazy-sounding story to Nick Bradley. That’s when the real adventure begins.

This novel is suspenseful and romantic and filled with excitement and surprises. The pages fly as the reader engages this roller-coaster like story through every anticipatory ascent, rapid descent, each twist and turn. This is an outstanding read that you will want to devour in as few sittings as possible. I am saddened that this is the final book in the series, but thrilled that all three novels are on my keeper shelf to be re-read again and again.


“Available April 2010 at your favorite bookseller from Revell, a division of Baker Publishing Group.”

Wyn said…
Hi Stacy, Just wanted you to know that I have awarded you a Sunshine Award. Go to http://wynsbooks.blogspot.com/2010/04/received-blog-award.html to pick up the picture

16shamrock said…
Stacey--Thank you for the fabulous review! Irene Hannon
8:29 AM